The Blueberry only settled to her bottle when I told her that Fonzie was Jewish. 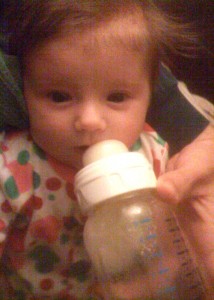 I fed her for the first time yesterday, and predictably, Blue wasn’t thrilled with Nipple 2.0. It’s part of my long and boring backstory that I take care of wild animals from time to time, so I’ve had to coax rubber tubes into protesting infant mouths a gazillion times.

Feeding baby girl, sad to say, feels about the same as feeding baby seal. Less furry. Smells the same, though.

You have to reach a special brand of firmgentleslow to get any new baby to take to a bottle, and I swear, I was getting there. But it took me a shamefully long time to remember one trick you get to use with a baby that’s verboten with seals: singing. And when I did, tragically, only one song from my painfully flat repertoire popped into my head and wouldn’t leave: The Hanukkah Song.

You know it, right? Adam Sandler, sort of a power ballad except that it’s not?

I’ve often said that anything’s a lullaby, so I gamely launched into a morose version of all the lyrics I could remember. And Blue? It only took my mentioning the native faith of both Captain Kirk and Mr. Spock for her to look up adoringly, seize that BPA-free nipple, and feed.

And so, just four weeks from mom-goes-back-to-work day, we’ve got ourselves a girl who will take the bottle. And just perhaps I’ll spend a little time coming up with a different song to sing her.

On the other hand, if it works…