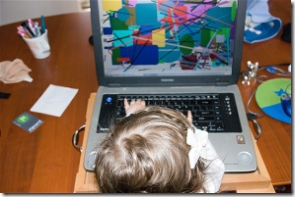 Boobaby, of course, got introduced to buttons early on — I blogged from my cell phone in the maternity ward. Now she’s obsessed with phones, to the point where we just took the card out of an old one and gave it to her. (It still beeps when you press the buttons, but it won’t make a call.)

And, the piece de resistance is the laptop. That is, we used to resist her playing with it, then gave in, and now it’s in pieces. She loves to pull the keys off, but we’ve found she can be coaxed into “appropriate computer behavior” with a program called “Baby Splat” that generates noises and shapes in response to keyboard input.

It’s not ideal — it doesn’t “lock” the screen, so Boobaby frequently switches to other applications randomly — but with supervision, it’s pretty entertaining.

In case you’re wondering, I’m not connected to or profiting from Baby Splat in any way… besides, it’s free. You can donate to them if you feel like it, and I think you should.